After a lengthy stretch of rumours, Valve announced Half-Life: Alyx out of nowhere alongside a brief trailer. We only got a handful of details at the time, but the Half-Life: Alyx release date is coming very soon. There will be no non-VR versions of Alyx, but it will be compatible across a wide variety of headsets, and now we have a bunch of new gameplay footage showcasing how the game works on a wide variety of hardware.

It’s as much about the controllers as the headset, as Tested’s video showcases. The new Gravity Gloves let you grab and manipulate items from a distance with your hands. You can pick up item crates and bust them on the ground. Guns are typically hitscan, with no auto-aim. All this means that the wide variety of motion controls that Alyx supports need to offer a great deal of accuracy.

And broadly, all the hardware configurations work as advertised – even the relatively inexpensive Oculus Quest, which many fans have been looking at as a more affordable way to get ready for Half-Life: Alyx.

You can see a full breakdown of how each hardware configuration works below. 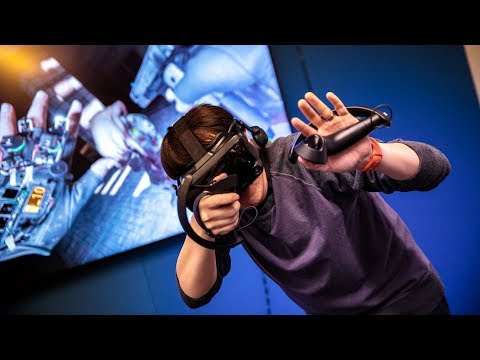 We’ll see how Valve’s big investment in VR turns out when Half-Life: Alyx releases in March 2020.