It’s really, really hard to figure out what Outriders is in its first few hours. A slow, lost world-style opening introduces you to the planet Enoch, humanity’s second chance after environmental collapse claims Earth, but after a devastating natural disaster you find yourself flung forward in time, imbued with superpowers, and plunged into a brutal civil war.

Yep, humanity flew itself halfway across the universe to start from scratch and managed to devolve into a Mad Max-like dystopia in less than a century. While the last remaining enclaves of humanity duke it out for resources, it’s up to you and an expanding camp of allies to trek across Enoch and uncover the cause of the natural disaster that sent the colonisation effort spiralling out of control in the first place.

I wasn’t expecting the main story to keep my attention for very long, but Outriders had me hooked for the duration of its 15-hour campaign. Your group’s search for answers across the war-torn surface of Enoch is packed with misery and suffering, both within your roaming camp and in the places you visit. Moments of levity keep it all from becoming overbearingly gloomy, and the humour is generally very well measured, rarely straying into edgelord territory.

This planet-spanning journey quickly settles into a familiar pattern of entering a new region of the world, battling through it to unlock every checkpoint, beating the final boss, and moving on to the next region. For the most part, each of the 17 different regions feels visually distinct, covering everything from snowy mountain expeditions to digging through the rubble of ancient desert civilisations. The same can’t be said for Outriders’ roster of enemies, which regularly rotate between giant insectoids and a few different human factions with all the regular archetypes: grenadiers, melee rushers, snipers, shotgunners, and minibosses. 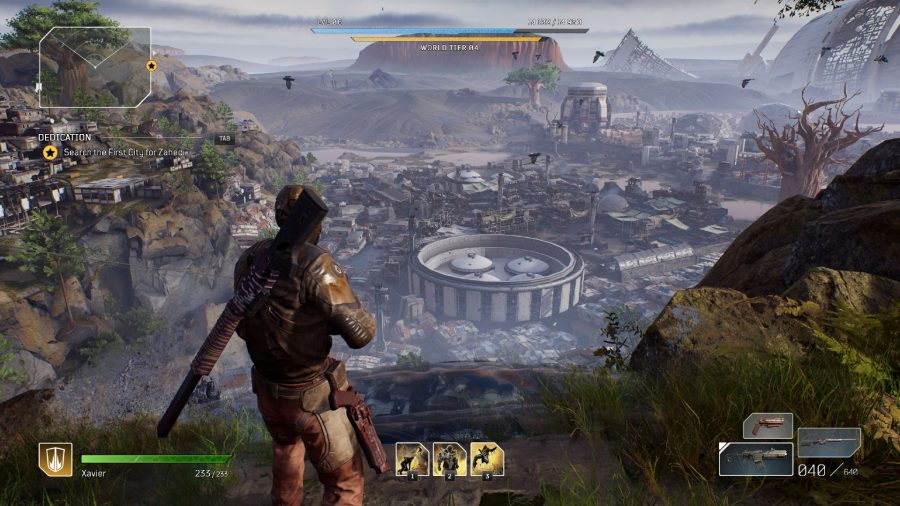 Despite being a cover-based shooter, you can pretty much ignore cover entirely once you’ve buffed your abilities a bit with skills and armour mods. You see, every Outriders class has a bespoke health regeneration mechanic that’s tied to combat, so sitting back behind cover simply doesn’t work. For example, Outriders’ melee brute archetype – the Devastator – recovers health from enemies killed at close range, so the only way to stay in the fight is to bulldoze through as many opponents as possible.

In the same breath, you will be absolutely annihilated if you take on too many enemies at once, so it’s up to you to manage the arena so that you’re always taking on the right enemies at the right time. This lends a sense of dynamism to every battle and keeps you constantly juggling abilities, gauging arena hot spots, and switching between passive and aggressive playstyles.

there’s a sense of dynamism to every battle

Every now and then a fight seems unfairly stacked against you, but Outriders lets you switch between world tiers to mitigate any difficulty spikes. For most of the campaign I had no trouble playing on the hardest tiers, but it was refreshing to have a temporary means of lowering the difficulty for the few moments when I just wanted to progress. On that note, it’s worth flagging that while Outriders is totally manageable as a solo player, boss fights present severe difficulty spikes in a way that feels like poor balancing rather than a genuine challenge, and if your class relies on getting kills to regain health then you can find yourself on the cusp of death for the duration of a battle. 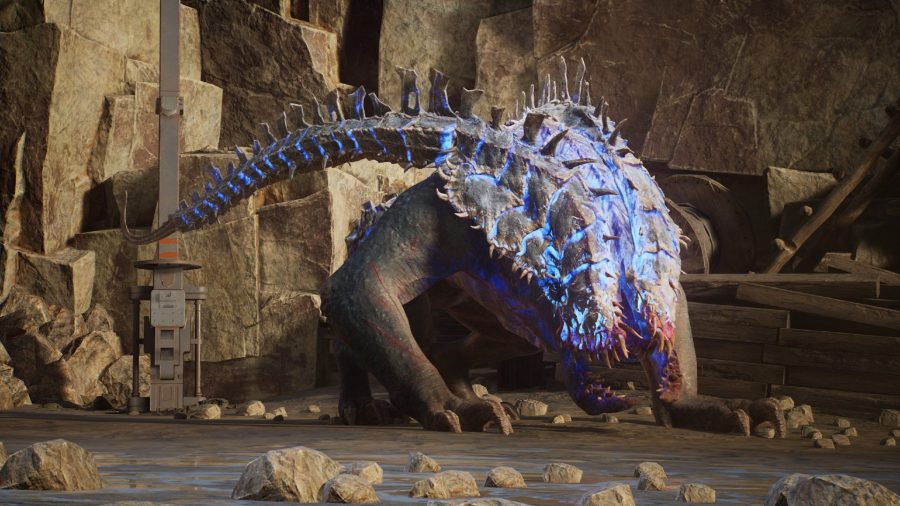 In addition to the main campaign, there are side quests, hunting missions, and bounties to complete, but they’re all very formulaic. Mix them in alongside the main campaign, and they bulk out the time you spend in each area and add a little variety to the gameplay, too. However, returning after the credits have rolled to mop up any leftovers exposes just how repetitive they are.

Convinced? You can pick up Outriders here

Bounties and hunting missions are effectively identical, except in one you’re hunting human enemies and in the other you’re taking on alien beasties. In both you have to clear out a couple of small areas of enemies before the boss spawns in. That’s it. Side quests have a story to follow, some small new areas to explore, and NPCs to meet, but also follow a cookie cutter format of traveling to a new area, talking to someone, fighting some bad guys, and returning to whoever you got the quest from.

There are highlights among the side quests, and surprisingly (for a loot shooter) they’re found in cutscene interactions and snippets of lore. In one of the lengthier quests I travel all over collecting keys to open a massive Outrider vault, partly to learn what happened to the other Outriders, partly in search of loot. When I finally crack open the door, perhaps excited to open a treasure chest, I’m greeted by a massive nuclear bomb which, by opening said door, I have just armed. Rather than stopping the nuke, my usually stoic and gruff Outrider launches into a panicked tirade at their guide on the radio after they suggest finding a refrigerator to hide in. 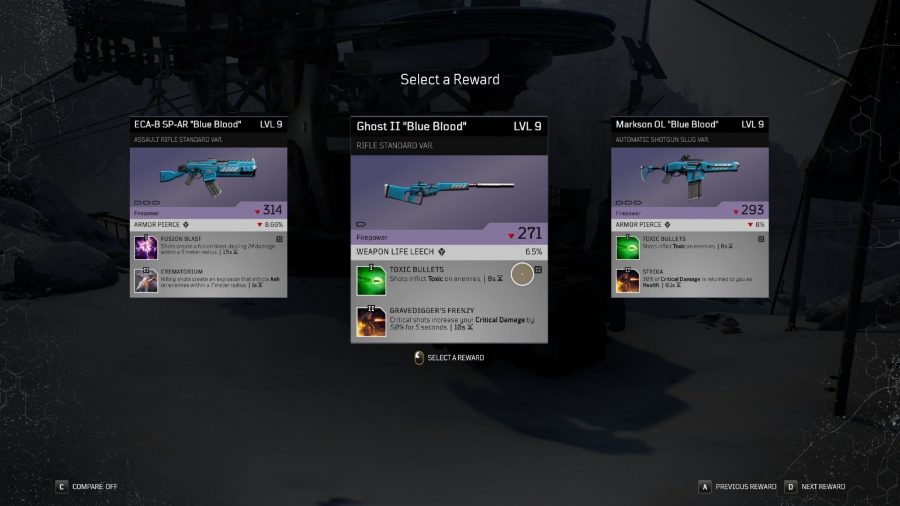 Unfortunately, none of this side content comes with the promise of standout loot. Every time you turn in a quest you get to choose one of three randomly generated rewards, but I can’t recall a single time when the reward was unique or worth including in my loadout. This sense of disappointment is exacerbated by the amount of fast traveling you need to do for each quest. There are several fast travel points in each region of Enoch, but these only allow for local travel, so if you need to hop between regions for a side quest you have to use two different means of fast travel, which gets old very quickly. For some side quests I spent more time hopping between fast travel points than I did battling through the quest’s area. Doing all that for a randomly generated rare or epic reward just isn’t fun.

Quality of loot is one of Outriders’ most persistent issues. In 25 hours of play I’ve picked up four legendary guns, and only one was good enough to stay in my loadout for longer than a few minutes. There’s very little that sets legendaries apart from other guns aside from some striking bodywork and the mod each weapon comes with. The upshot is that, while your legendary assault rifle may drop lightning on any enemies you shoot, it still feels like every other assault rifle in the game.

Outriders also lets you separate mods from guns by recycling them – including legendaries – so as soon as a better gun came along I recycled the legendary to get its tempestuous mod and put it on the new gun. This flexibility makes it easy to stay on the apex of Outriders’ difficulty, but it stops top-tier loot from feeling truly special. 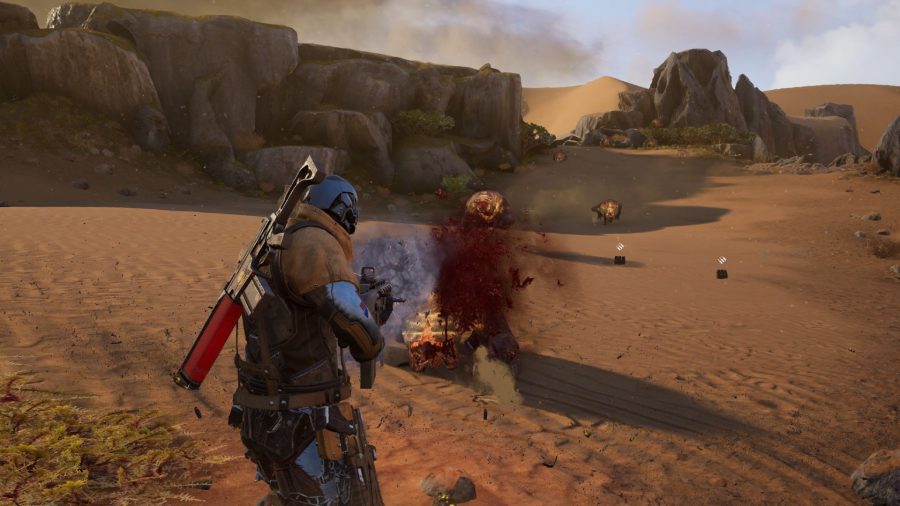 But the root of Outriders’ loot problem is that all of its guns feel homogenous. Aside from obvious differences like rate of fire, there’s very little about the gunfeel to distinguish one gun from another. Weapons sound meek, there’s very little feedback when you connect with a target, and recoil is practically non-existent. For all of Anthem’s problems, its guns packed plenty of punch and personality. So do those of other genre rivals, like Destiny 2 or The Division 2. But these qualities are absent wherever you look in Outriders’ arsenal.

mauling enemies with your superpowers is a ton of fun

It’s just as well that there’s more to Outriders’ combat than shooting, because fortunately mauling enemies with your superpowers is a ton of fun. I’ve tried every class now, but the Devastator is my firm favourite thanks to an ability that lets you raise a spike from the earth to impale enemies. Add a couple of gear mods to get more spikes and you can form tidy rows of skewered goons mid firefight – it’s beautiful. Gravity Leap, meanwhile, lets you hover above the arena, select a target, and then hurtle at them like a comet, turning anyone near the impact zone into a pink mist. These abilities more than make up for the visual feedback that’s missing from Outriders’ gunplay.

Brief forays into online co-op show more potential, with a class like the Trickster able to create time warps, slowing down enemies in little bubbles of punishment as I go to work hurling boulders at them from afar. 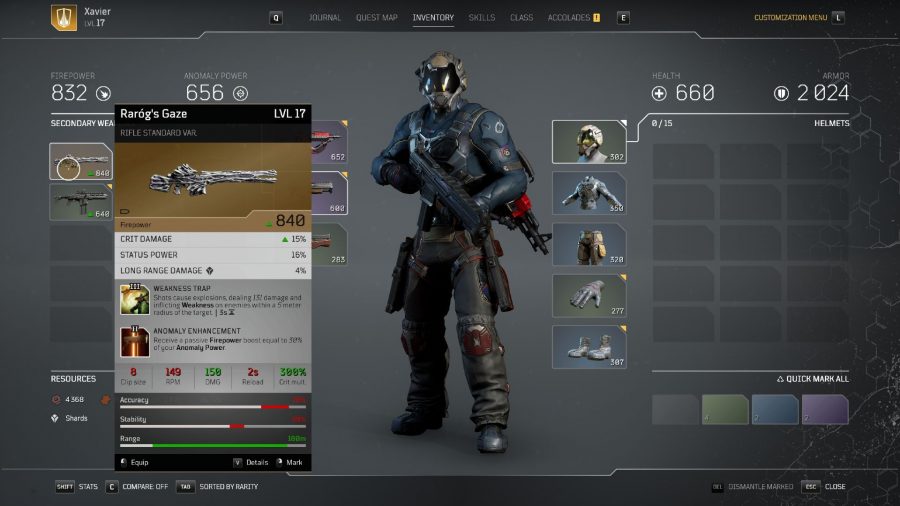 Once the credits roll on the campaign you unlock expeditions, Outriders’ endgame. These are small, bespoke missions where you play against a clock, with faster completion times granting rarer loot. Much like Outriders’ side content, there’s a distinct lack of variety when it comes to the structure of each expedition – each is basically just a desperate rush to kill everything in sight. Beating expeditions at the highest difficulty unlocks even higher difficulties and new expeditions, which eventually lead you to the game’s true final boss fight. I’m about halfway there at the time of publication, but I’m enjoying the grind, especially as certain expeditions give closure on some of the campaign’s hanging plot threads.

Outriders gets a lot right, but it’s a ‘loot shooter’ in which both the looting and shooting are far from the best the genre has to offer. Fortunately, Outriders compensates for this in other areas, with superpowers that put the recent Marvel’s Avengers to shame and a blockbuster narrative supported by smart worldbuilding. It’s far from what I expected after playing the demo, but overall I’ve had a good time. And goodness knows this genre is littered with far less successful launches than that.

You can grab Outriders for yourself on the Humble Store if it sounds like your cup of the proverbial.