Want to try out the best CR-56 AMAX loadout in Warzone? The CR-56 AMAX doesn’t appear to be game-breakingly powerful at first, but you can negate a lot of the recoil to make it an extremely powerful weapon. Warzone’s meta has drastically changed since the DMR 14 was nerfed, opening up plenty of room for a weapon like the CR-56 AMAX to establish itself as one of the best in the battle royale game.

In terms of handling, the CR-56 AMAX feels more like the Scar and AK-47, which might dissuade some players from using it. This weapon does take some time to get used to, but it doesn’t take too long before you can take out enemies with ease. The headshot multiplier on the CR-56 AMAX is one of the main reasons to pick this weapon, providing even more damage for players with steady hands.

The CR-56 AMAX is one of the few Modern Warfare weapons that can give the Call of Duty Cold War guns a run for their money. Many of the attachments in this build are fairly standard across the best assault rifles in Warzone, so expect the mono suppressor, extended barrel, and other classics.

Here is the best CR-56 AMAX loadout for Warzone is:

This setup is pretty basic, but does three essential things for the CR-56 AMAX: extend the magazine, decrease recoil, and improve your long-range effectiveness. Considering the AMAX packs a punch but fires quite slowly, you definitely want to use this for fighting over long distances and keep a close-quarters weapon for your second loadout drop like our Warzone MP7 build or MP5 loadout. Our Fennec Warzone build is also worth checking out, as it’s unmatched in extreme close-quarters situations. 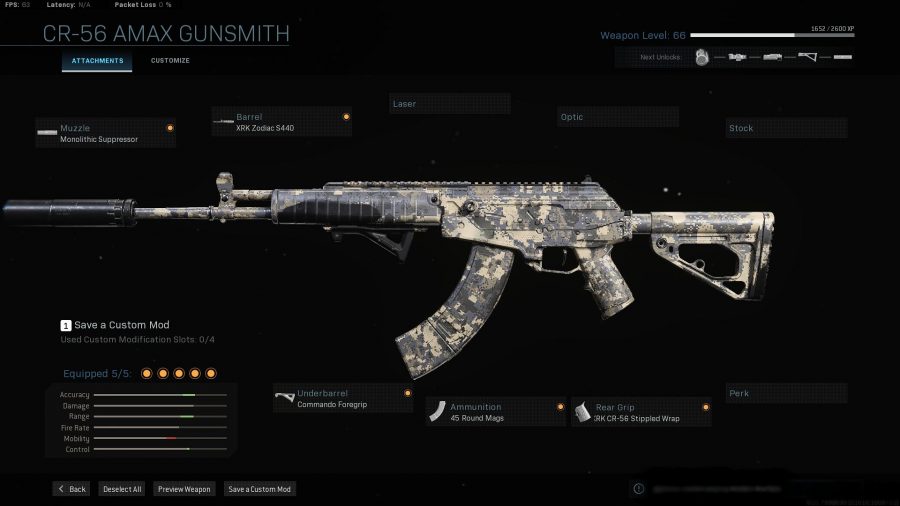 Grips are the only contentious part of this setup, as many of the options help in slightly different ways. We’ve tested all of the options and find the Merc Foregrip is the best grip for the best overall accuracy. If you feel like you can handle the recoil without any issues, you might want to switch to the Commando Foregrip instead. With the Commando Foregrip, your movement speed slows down a tiny bit, a small price to pay for accuracy.

The iron sights on the CR-56 can be tricky, but you’ll want to use all the attachments at your disposal to get the best out of this build, so choosing an optic isn’t advised. Larger mags and suppressors are essential for Warzone, but one area that also needs buffing – especially on this AR – is the low bullet velocity. Even in medium sized multiplayer maps you’ll struggle to hit targets moving at range with the CR-56 AMAX, so you’ll want the monolithic Suppressor and XRK Zodiac S440 barrel to make long-range fights easier.

As for what perks, secondaries, and equipment you should use. We always suggest using a Heartbeat Sensor and C4 as your equipment – the former will save your life when clearing some buildings, while the latter is great for dealing initial damage before taking a 1v1. You can choose any secondary you want as you’ll ultimately want to get a second loadout drop anyway, but a rocket launcher or Akimbo Renettis wouldn’t go amiss. Finally, you’ll want Ghost as your second perk, Tracker for your third perk, and either EOD or Cold-Blooded as your first perk. EOD is best for surviving RPGs and C4, while Cold-Blooded will keep you off thermals.