We started our Video to Tabletop series last year, looking at how some franchises transition from video games to the tabletop. In this article, we’re going to look at 8Bit Box by Iello, which is a very interesting take on video to the tabletop. We’ll look at what the product is and also talk to ZZZZZZZZ the Game Designer about how they handled bringing the retro classic feel to the tabletop.

Rather than being a tabletop game based on a specific video game, 8Bit Box takes it one step further and creates a whole concept around retro gaming. 8Bit Box comes with 3 different games, all centered around a core of components. These core components are a set of controllers, dice and cubes, that come stored in a box that looks like a console. Individual games, which come packaged as console boxed games, then add additional elements to make up each game.

8Bit Box comes with 3 games, Pixoid, Stadium, and Outspeed, with space for another game inside the core box. In this article, we’ll also be looking at an 8Bit Box expansion game, Double Rumble. 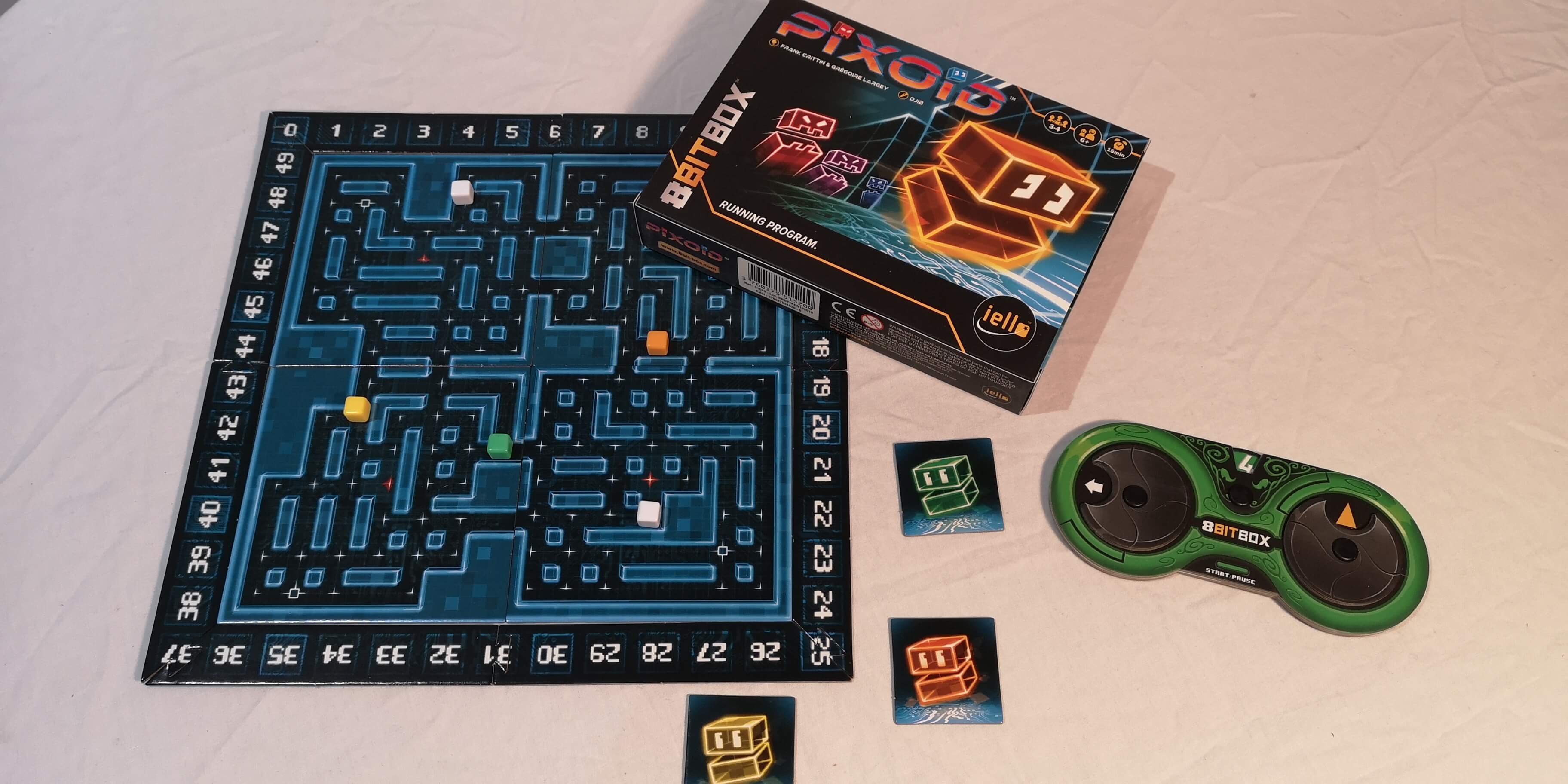 Pixoid Is a Pac-Man-esque game for 3 or 4 players. The gameplay is essentially is a hidden movement game where 1-player is Pixoid and the others are Bugs, trying to catch them. Player’s use the controllers to secretly state which direction and how far they want to move. Pixoid can grab cubes from the board and also gets a cube for each round they avoid capture. After the 12th round, or if Pixoid is captured, a point is scored for each cube grabbed and the next player takes on the role of Pixoid until all players have played as Pixoid. The winner is the player with the most points. 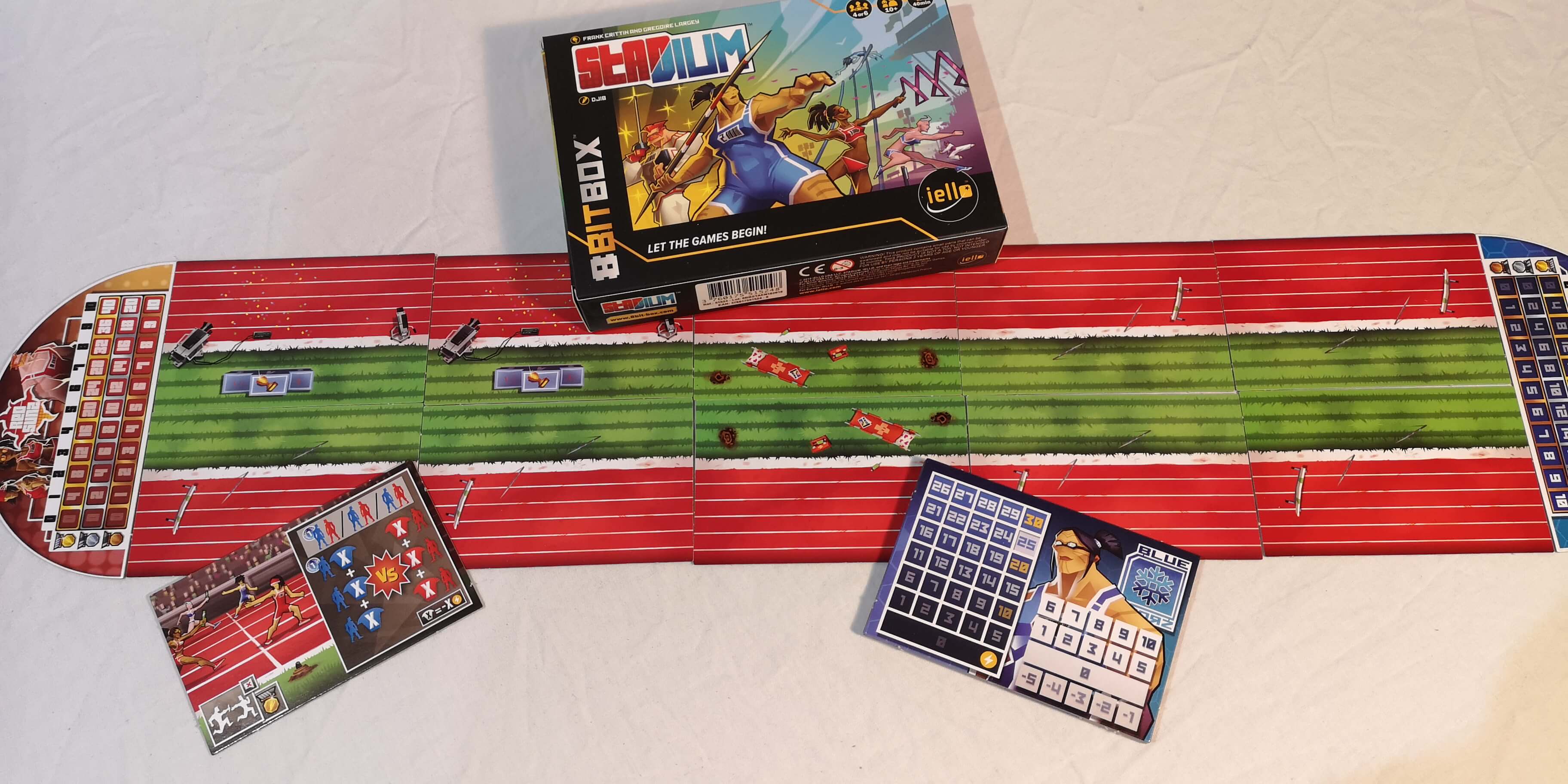 Stadium is a Track and Field style game, where 2 teams of 2 or 3 players randomly select 10 events from a possible 16 events to participate in. Each event is different and because of the variation, each game will be different as well. After the event cards are randomly drawn, then they are placed face down and all connect together to form a track and are flipped over as the game progresses. Each event requires players to secretly bid energy with its own unique event twist, such as the equestrian, which requires players to beat a score with energy spent plus a dice roll. The energy comes out of their energy pool. The trick to each event is to spend just enough to win, but not so much that you burn through all of your energy before the end of the events. The winners of each event receive medals, which are worth victory points, and the winning team is the one at the end with the most points. 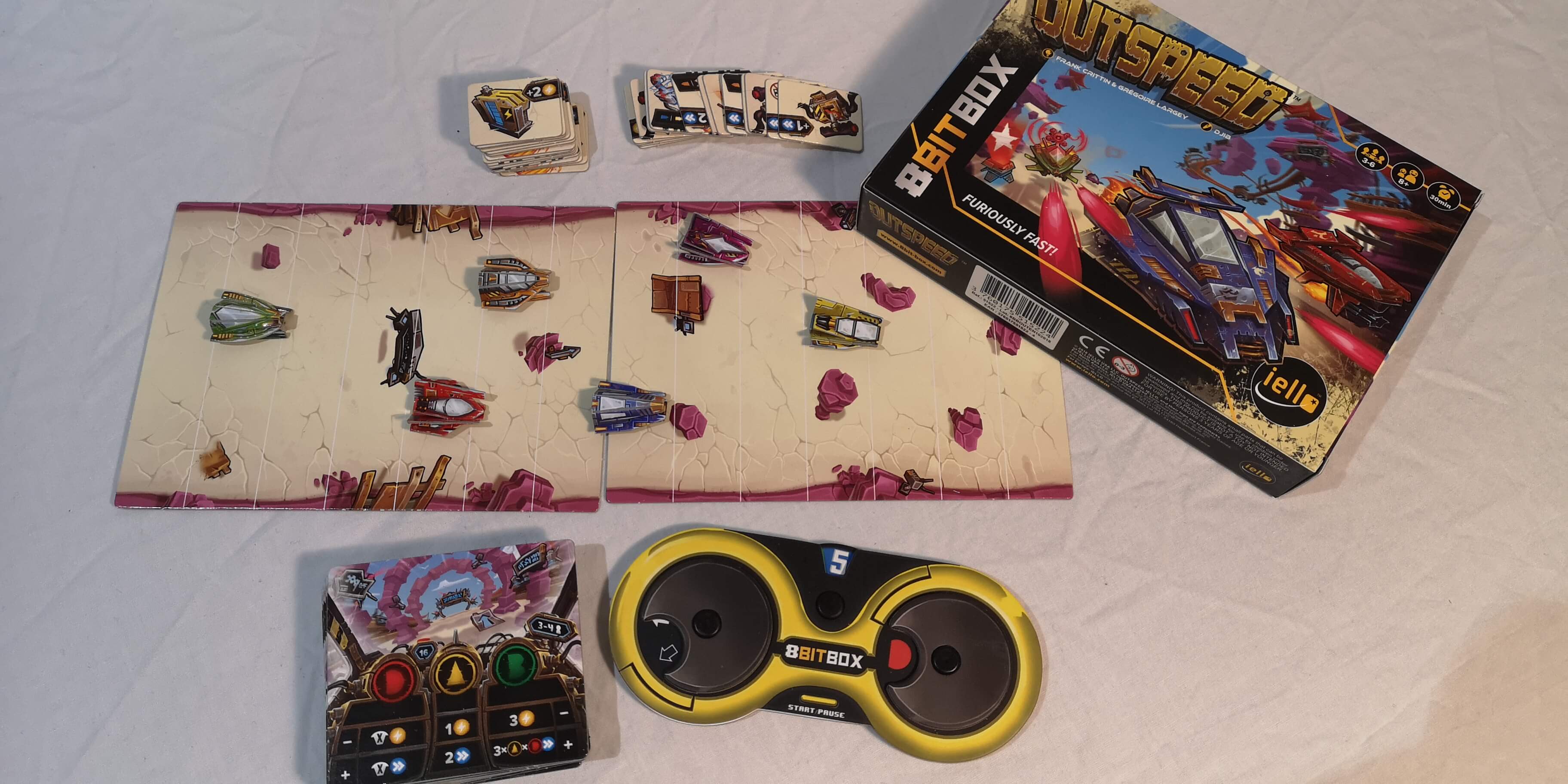 Outspeed is a racing game where 3 to 6 players pick routes out of a choice of 3. Some routes are restricted in how many players can take them and each route costs fuel, which has to be managed throughout the race. Each player has a 3d ship and their race positions are recorded by positioning them on a 2-part track. If a player pulls far enough ahead, a new track is laid and the last track is removed, along with any players trailing behind, run out of fuel and you’re also removed. Players can also use bonus tokens, such as the Ion Cannon to strip away opponent’s fuel, or the Nitro to zip ahead in the face. The winner is the player in the lead after the 12 route tile is completed. 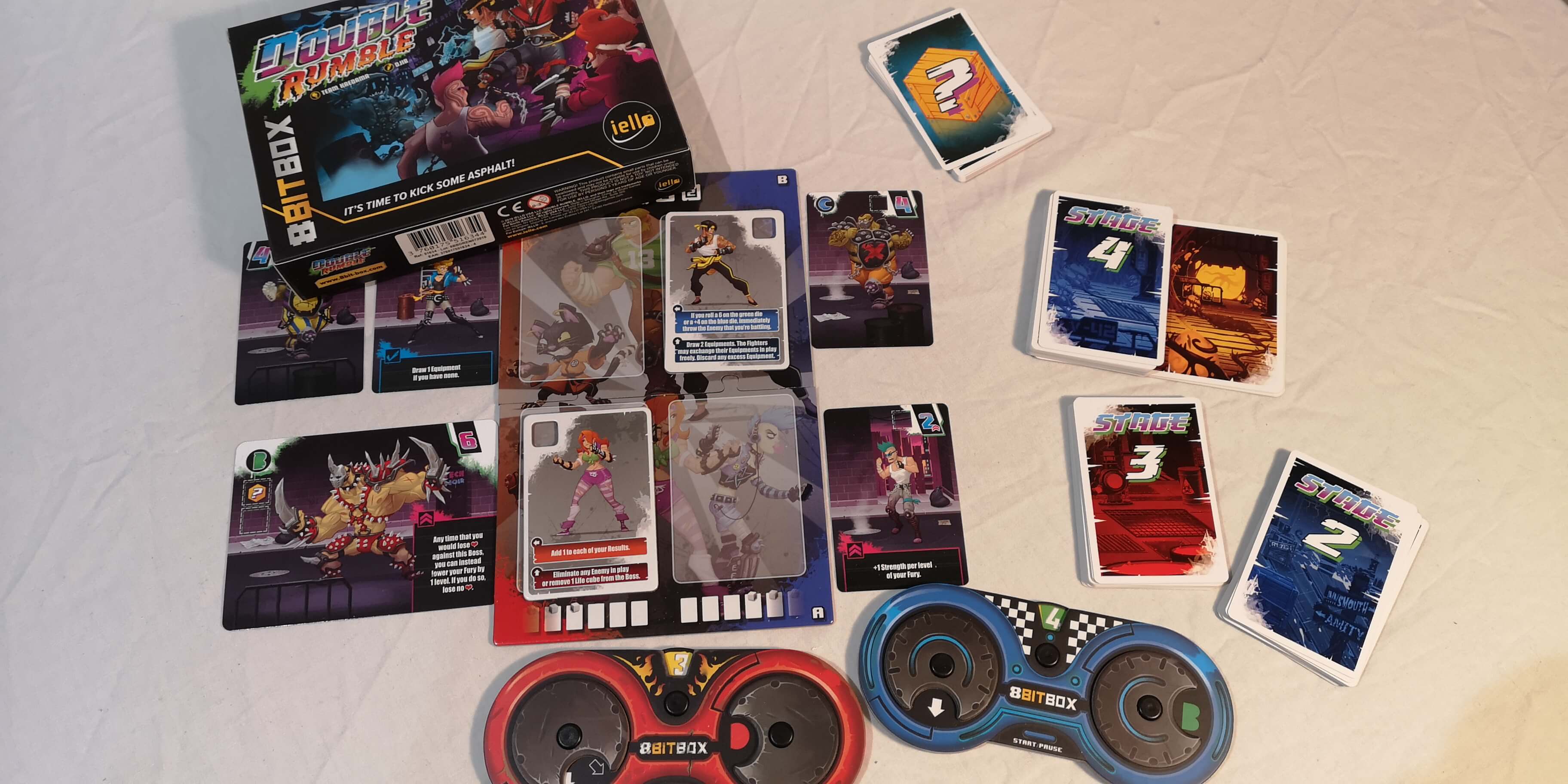 Double Rumble is a side-scrolling beat-em-up game like Streets of Rage or Double Dragon. 1 or 2 players play cooperatively to fight their way through a series of enemies and bosses across 4 stages. Each player selects a fighter, which is placed on board of 2 rows. Enemies are dealt to the rows on the left or the right and players have to move around the board defeating them until they can battle the boss. To battle, players roll a dice and have to score over the strength of the enemy. The dice can be modified by rolling additional 8Bit Box dice if you have equipment of special abilities or negatively modified because of an enemy’s ability. The players win if they defeat the final boss. If a player’s fighter is taken out, they can use a credit to bring another fighter in, but the players lose when they run out of credits.

Between the 4 games, there’s scope for all player numbers. If you don’t have Double Rumble, then the minimum player count is 3 for Pixoid, Stadium, and Outspeed.

The games are all fun, and incredibly thematic. Nice touches like flipping the fighter card over in Double Rumble to change facing, the controllers, the art and the general mechanics all give 8Bit Box and incredible grasp of theme. And it really carries through to the enjoyment of the games. Each game is light, fast, and fun. If you’re looking for deep strategy, you won’t find it here, but if you’re looking for some easy fun, with some nostalgia thrown in, then 8Bit Box is for you.

Each game has its own feel, but they all have incredibly simple mechanics that are easy to teach. Stadium requires some looking up rules for each event, but they are not complicated, so it doesn’t take long.

Everything from the components, to the mechanics, really do a great job of capturing the retro video game feel.

We caught up with Frank Crittin and Grégoire Largey. the designers of 8Bit Box to talk about the design process for their game.

TechRaptor: Talk us through the design process for 8Bit Box. Where did the idea come from? Was it a single game idea first, or was it always meant to be a core product with expandable games?

In the beginning, we were working on a cycling racing game that focused on programming at the mechanism level. While working on the prototype, we thought it could be funny to employ for the programming the symbols from a well-known console controller (Composed of square, cross, circle and triangle ;-). But they weren’t controllers at first, we were merely using these symbols on cards. And then we think: “rather than handling cards, as in almost all programming games, we could use a type of controller”, and so it led us to the 8Bit Box. With this “controller” in hand, then it was completely obvious to imagine games based on retro gaming themes.

TR: In the design brief, what were the most important elements to get across for 8Bit Box?

In the first place the most critical thing was probably the controller. It was supposed to make you want to play but still with old-school feeling. For that, Iello really performed a brilliant job. When you take the controller in your hands, it makes you want to play. Secondly, the whole project had to be as close as possible to a real video game console. Here again Iello did a terrific job. They have even proposed development kits to other designers to allow them to develop their own games. Just like the video game model.

TR: Were there many changes from brief to production in terms of game mechanics?

Not at all – the game in its philosophy has remained very close to our prototype - but of course much prettier, thanks to Djib’s superb work.

TR: What was the biggest change during development?

At the beginning we only had 2 wheels on the controller. During the development, we decided to create a third wheel with numbers. This idea brings a lot of possibilities to make a lot of different games still based on the controller.

TR: Were there any difficulties? I imagine that creating a core product that can be expanded presents its own interesting challenges.

As the starting points were the console and retro gaming, we didn’t encounter too much difficulty to start with the concept of a platform to leave other game authors the possibility to build their own universe and their own rules.

TR: Theme is obviously a huge part of 8Bit Box, how difficult was it to balance theme with playability?

The themes are related to the choice of the old computer game we desire to adapt. As soon as you have chosen the classic video game, its adaptation for 8Bit-Box is relatively straightforward. It can go from fighting games like Dumble Rumble, to sports games like Stadium to many other types of games like strategy games, dungeon exploration, simulation, etc.

TR: How difficult was it to capture the video game feel on the tabletop? Was the feel a priority or a by-product of the theme?

Our first protos were a super minimalist thing, with a cardboard coupon and 2 wheels because we couldn’t do better. With the ideas of the IELLO team and the remarkable illustrations of Djib are incredible. The main video games companies like Nintendo and Electronics Arts may tremble.

TR: You’ve got a clear retro target audience, what were some of the must-haves for mechanics?

With the first extension, Dumble Rumble, the fighting games are currently represented. Racing games like Outspeed, seemed equally essential to us. The sports games like Stadium were among the types of games we enjoyed to play on our old Commodore. It was therefore clear to integrate one in the range.

TR: What’s the future for 8Bit Box? Are there any further expansions or editions planned?

TR: What are some of your favorite retro games?

On Commodore 64: Aztec Challenge, Decathlon RCA, Rollerball… Rollerball this one would be incredibly fun to adapt to 8Bit Box.

TR: What was your video game system of choice growing up?

We are not very young, so…. when we were young we were playing on Commodore 64. I even remember that the first games we played on it we have to load them using a tape drive – Load “*”, 8, 1

TR: Thank you very much Frank and Grégoire for your time. We look forward to seeing what’s next for 8Bit Box.

The copy of 8Bit Box used for this article was provided by Iello.

What’s your favorite tabletop video game? What do you think of 8Bit Box’s concept? What retro game would you like to see get a Tabletop incarnation? Let us know in the comments below.