Watch Dogs Legion is officially the third open-world game in the anarchic, tech-savvy series. Some details leaked ahead of the biggest videogame show on Earth – as is customary for Ubisoft titles by this point – but we still got a chonky reveal at E3 that confirms the leaks and gives us new information on top of that.

The first and obvious thing is that it’s not called Watch Dogs 3, as many of us had expected, it’s called Legion. Why Legion? One of the early gameplay features to be shown off gives us the ability to turn any citizen on the street into a playable character. So there’s a bit of an army of hackers vibe going on.

The previous game is something of an overlooked gem this generation: Watch Dogs 2’s PC gameplay and tone rivalled even GTA 5 in its best moments, but was swallowed up by the myriad impressive sandbox games that also landed in that time, such as Horizon: Zero Dawn and The Legend of Zelda: Breath of the Wild. Either way, a few years on from the second game, we’re ready for another technologically-enhanced Ubisoft world – as the Watch Dogs Legion release date isn’t too far away, here’s everything we know about the upcoming PC game so far.

The Watch Dogs Legion release date of March 6, 2020 has now been pushed back, so we no longer have an exact launch date for the hack ’em up sequel. Ubisoft announced several delays following the poor performance of Ghost Recon Breakpoint, but has assured fans that the three delayed titles should all still release in 2020.

Ubisoft says the delay gives its teams “more development time to ensure that their respective innovations are perfectly implemented to deliver optimal experiences for players.” 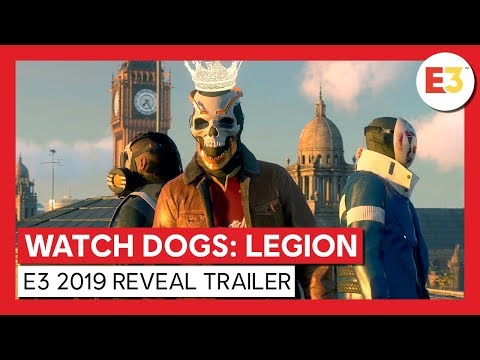 It wouldn’t be an E3 reveal without a trailer, of course, and you can catch a glimpse of Ubisoft’s post-Brexit London above. One of the main features to be shown off is the game’s central idea that everyone and anyone is recruitable. Just how true that is remains to be seen, but we’re happy to enjoy old lady Helen’s sleuthing around in the meantime. 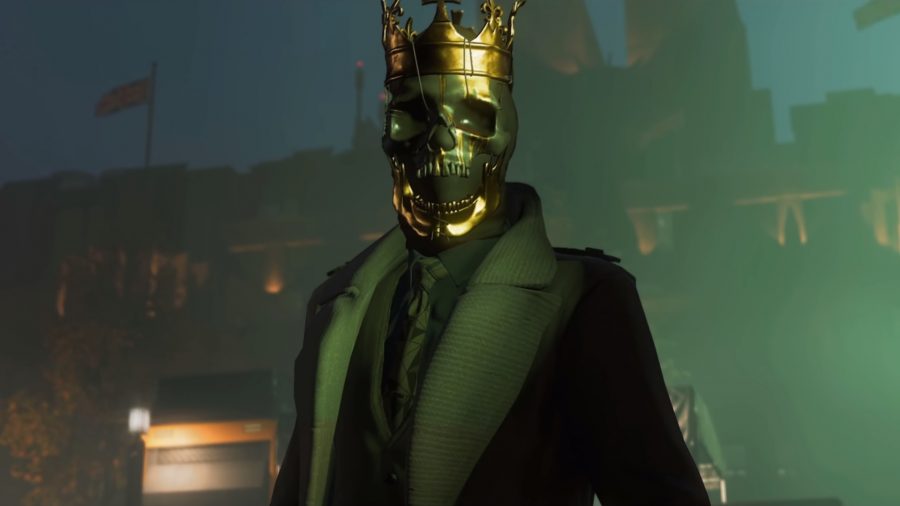 One of the main tidbits of information to come out of E3 was that Watch Dogs Legion would be coming to Google’s new gaming platform, Google Stadia. Ubisoft’s hack ’em up will still be releasing there March 6, too, which is no different to the PC release date.

If you’re into your collectable items, you can fetch yourself a replica skull mask with an LED crown with the Watch Dogs Legion collector’s edition. Do keep in mind, though, that it’ll set you back $189.99.

Another way you can play Watch Dogs Legion is through Ubisoft’s upcoming subscription service Uplay Plus. You can expect it to launch in September, and it’ll cost $14.99 per month. There’s a bit of a wait between September 2019 and March 2020, but you can noodle around in Ubisoft’s back catalogue to pass the time, and play games like The Division 2 and Far Cry: New Dawn.

We also know that a portion of the Watch Dogs Legion soundtrack is being made with help from actor Joseph Gordon-Levitt’s crowd-sourced production company hitRECord. Ubisoft put out the call to fans to help produce 10 songs for the soundtrack, with $2,000 USD (£1,590) being paid for each track, which will be split between everyone who contributes to the final version. 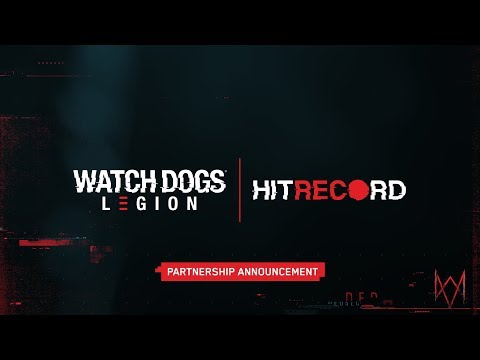 The collaborative part of the soundtrack will cover genres ranging from hip-hop and electronica to punk and metal, so expect the Watch Dogs Legion soundtrack to be pretty eclectic. Like GTA, these genres will be represented across different radio channels you can select while driving. 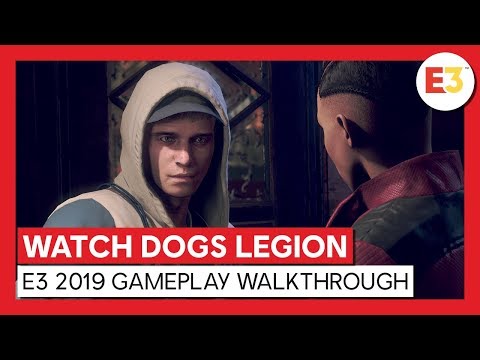 Making its return in Watch Dogs Legion is a selection of non-lethal and lethal weaponry. The game’s predecessor leaned a good bit into the former and saw protagonist Marcus knock people out with a stun gun and that yo-yo thing. That said, there was plenty of deadly and loud weapons on offer if that wasn’t your style, from assault rifles to pistols. So, you can expect plenty of variety from Watch Dogs Legion’s guns. Rumours were swirling around before the reveal that lethal guns wouldn’t be coming, but the gameplay trailer above says otherwise.

With Watch Dogs Legion’s concept of building an army in mind, it makes sense that you can play Watch Dogs Legion co-op with up to four friends. Multiplayer enthusiasts can expect dedicated online content with missions and side activities, such as bareknuckle boxing, freestyle football, illegal couriering, and posting street art. According to the game’s website, there will also be “challenging endgame content”, alongside “free regular updates adding new online modes, rewards, and themed events”.

There’s no word just yet on what that’ll all include, but to us it all sounds quite similar to GTA V Online’s suite of activities, which include multiplayer heists that act as endgame content.

If you’d like to see some of this gameplay in action, check out the Watch Dogs Legion gameplay demo above. 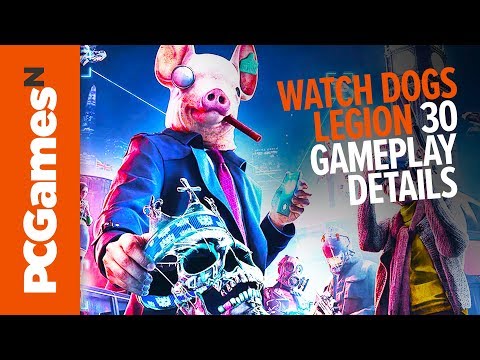 We had an idea that recruiting and playing as non-playable characters would be a feature thanks to a pre-E3 Watch Dogs Legion leak on Amazon. The game’s creative director, Clint Hocking, expanded on how the Watch Dogs Legion NPCs work during E3. Hocking explains that each NPC is a unique character that comes with their own backstory, relationships, stats, and abilities.

There’s a reason for the attention to detail, though. Watch Dogs Legion has permadeath, so if you’re careless with the NPCs you acquire you’ll feel the sting of their loss as they won’t come back. That’s not all, though, there is also Watch Dogs Legion character schedules – that means that an NPC’s spouse or relative will mourn their loss, but will eventually move on. So, do take care of the poor NPCs you enlist into your war.

Sadly, this attention to detail also means that Watch Dogs Legion has no dogs. A shame, as Watch Dogs 2 lets us dote on some wonderful puppers. We’re not the kind of website to let this kind of thing slide, though, so we asked Hocking about it.

“Does someone adopt the dog? Does the dog become a stray? Does it disappear out of the world? That doesn’t seem fair. Do we need to up-res the dog and make the dog a part of the simulation? We already bit off a lot, and we were like ‘I don’t know how we do that. I don’t know how we deal with this problem. And so yeah – no dogs.” 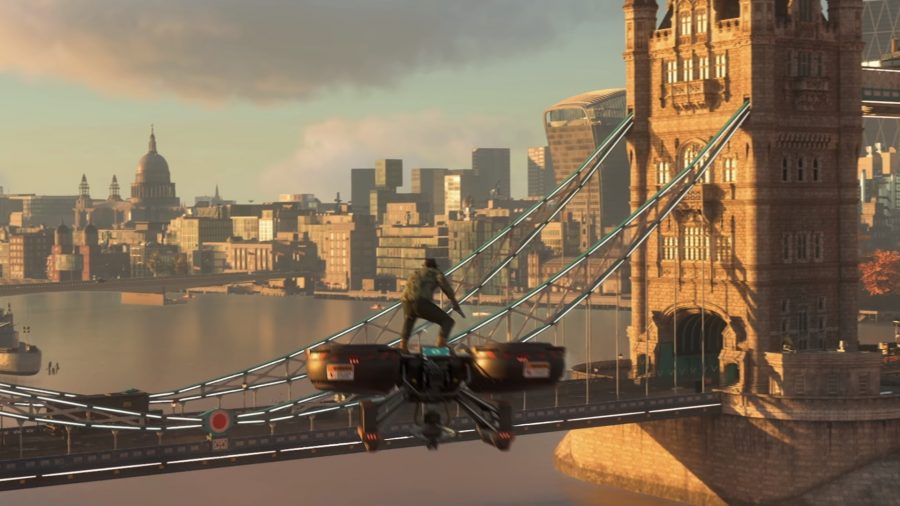 A Watch Dogs 3 London setting has been touted for some time now since it was teased at the end of the previous game. But this isn’t your typical representation of England’s big smoke: Watch Dogs Legion’s setting is confirmed to be a post-Brexit, dystopian London.

According to Hocking, however, Ubisoft decided on London as Watch Dogs Legion’s setting before the Brexit debate kicked off in earnest. That said, the studio has embraced what’s happened, and isn’t shying away from what is, admittedly, a tricky political climate.

Speaking to PCGN, Hocking explains his stance regarding Watch Dogs Legion’s post Brexit London setting. “Ubisoft as a company has its position,” Hocking says. “But every project has its own operational reality and its own stuff and Ubisoft’s position has a guideline for all of us to follow and our game definitely has something to say and we’re happy to say it.”

It’s not all Brexit, though, and Ubisoft has put a lot of thought into the game’s location design. So big is the Watch Dogs Legion map size, apparently, that it stretches from Camden to Brixton. If your feet feel weary at the thought of doing walking that, though, then you’ll be happy to know that there is Watch Dogs Legion fast travel. Of course, the fast travel in the game is represented by the Tube in the London Underground. It is London afterall. If you don’t fancy the tube, however, and want to experience London’s terrible traffic, you can hack and control the city’s infamous black cabs.

Legion heirs: Try out these action-adventure games next

And there you have it, that’s everything we could rustle up about Watch Dogs Legions. We’re DedSet (geddit?) against a move away from the hacktivist open-world formula we’ve come to love from the series, but we’re looking forward to this third game taking a turn for the edgy in the green and not-so-pleasant lands of post-apocalyptic Blighty.